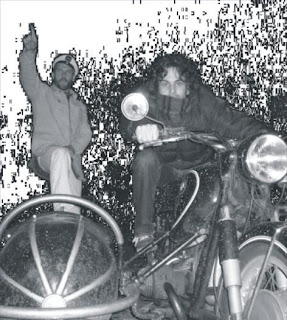 “The Return of Disco” I’m wondering what you think of that.

I dunno. Should we start there? I think like, I have noticed you know, the hipster kids love to dance to disco. It’s great fun seeing all the wonky white kids show up and jump around and enjoy the disco music. It has to happen. For me, there’s no real…disco is not like, “good or bad” it’s just whether you disco. Do you or don’t you disco? It’s not good or bad or in or out, there’s only disco. Like, nothing can really replace disco. It’s something you do.

Why do you think it was maligned for so long in the states?

That for sure, but there's always this forbidden fruit thing, to be into it.

I don’t know why it would fade in and out. You can get too much of a good thing, knowwhaddamean? Heh heh. I’m just turning into too much of a well-rounded, groovy kind of person. I’m gonna get aggro for a bit. I stepped away form the damned disco for a minute. For awhile there, taken to the Loft. You know a long time ago.

When it was on Ave B and 13th Street. And I… had to step away from the disco.

When did you go?

Aww shit, ’96. I stepped away from the disco. I was doing whatever. Like, punk rock here in downtown.

You were doing A.R.E. Weapons then?

Exactly. I stepped away from the disco and started doing that. I needed a bit of aggro. Get a bit of a balance. Disco is always there. And punk rock is always there! It’s like, new kids step into the shoes. The outfits are all the same. Pants are black and tight, shoes are pointy. After you’ve done that for a bit, you want your trousers loose and shoes all round. You step from one to another. That’s what’s so exciting when something else comes between. How much can you get in-between? You can’t step to the party in cellophane and tinfoil all the time.

Yeah, it is. Punk rock and discotheque they’ve always been there. For so long now, it’s as if they’ve been there forever.

Is it a little seedier than it used to be? More punk rock now?

I get what you’re saying.

Punk culture is the Vans tour, you go to the mall, that’s punk.

When did you and Eric start doing it?

What made you guys do that?

That’s the thing. Me and Eric were hanging downtown, part of whatever, the punky arty-farty scene and everyone needed to disco! That is literally what happened. We sorta remembered that we needed to disco. What’s missing? Both me and Eric knew how to do it. I’ve been doing it for years, really. It just caught on like wildfire. People weren’t doing proper disco. Me and Eric kinda did. We took it to the loft, it went all night, it was covert, and those kind of things. Disco has a very kind of schmaltzy appearance by that point. The house music phenomena just became so banal, everybody basically, it was like everyone’s parents were going to the fucking club, it was so drab. We used to call it “dinner house” at that point. Something you get a fish dinner and a glass of white wine with it. the music was sooo bad. So we would, me and Eric, we sorta…we needed to disco, our friends needed to disco, as we feel it should be done. It’s what everyone needed. That was a coup. That came together nicely. Mmmm-hmmm.

There’s the whole Norway and SF thing. What made it turn? Did the revelation you had here did you feel like people in other parts of the world felt the same way about it?

I think New York has its own way of dealing with it. you get like…you get regional variations and I think that’s very healthy. Depending on where you are in the world, you get your local version. Whatever, Vice Magazine Disco, which is what we’re talking about in a way, there is a regional variation. The New York variation is the one I like the most, which is things go slow, things go long, you play the whole tune, that kind of style.

Mancuso is the ultimate. He epitomizes the sort of the New York sound, the New York style, and everybody, it seems to fit it. if you live in Oslo, you got to try and create some excitement. In New York, if you’re playing for 12 hours, you need to go long, you need to go slow. Going out in Oslo, it’s only on for three hours, so it’s all frenetic. In Italy, I love the regional aspects of it, yeah.

Do you think it’s better connected now because of the internet, the easy way of making a connection?

So the internet thing. I dunno. I’m not sure how that affects like…the Vice magazine disco action. Disco on the internet is pretty trainspotter, it’s really anorak.

That’s interesting, it’s pretty anorak. It’s really fascinating. The story with the edits is that disco in a way, was created by edits. It goes back to the old theory of extending the break.

Tom Moulton who was actually a big-shot engineer. Tom Moulton’s story is he did the very first disco mix, I interviewed him once.

Ah, he’s great to talk to. I couldn’t get him off the phone, really. He was really bitchy, real queen. It was really fun. Walter Gibbons was an early edit master. Tape edits, it’s an interesting thing, the whole super re-emergence of disco edits, cuz you know, it’s a bit overkill but ultimately it’s a really important part of disco. And it suits the current moment of like, free-for-all with the computers and moving material around. It suits that. It suits the chop-it-up and regurgitate culture we have at the moment. But actually, the whole concept of extending the music and making things rare, making things unavailable, that was a big part of disco and the original re-edit. There was only one reel. You played it at the club, it was your cut. And if they wanted to hear your cut…you know. That’s beautiful and there is an element of that, the re-edits are limited edition, that kinda thing. That’s really exciting. It is a bit overkill, but it’s definitely part of the heritage and I think it’s cool that it still goes on. I do Ottoman Empire as my edits, and I do edits through Rub n Tug.

Harvey used to be in a punk rock band?

When he was 12-years-old. Who knows when that was? Yeah, he’s a bit older than me. That was way back in the day. We have our band, Map of Africa.

Swinging back towards rock.

Would you put disco down again?

I do. I get a bit over it. now it’s interesting. The Italo stuff, that was a breath of fresh air. I turned on to that quite a long time ago. Chris Brick and those Smile On Nylon tapes. He turned me onto Italo back then. It was refreshing. It had the white man angle on it. It was bearded and it was white. It drank martinis, it was sleazy, it was heavy, and it wore shades. That felt good. It was a change from rainbow knee-highs and platforms. That was why a lot of people had gone for it. They like the darker aesthetic, the sleazier aesthetic, the Italo-sound. Its all synthy so that appeals to the wonky white guys.

Especially to those coming in from the new wave side of it, all synthesizers and drum machines.

Yeah. Exactly. So like, um...nowadays, that’s been going a long time. I’m really feeling vocals again. It’s all there. you go through a phase. You need a bit of one, you go and get a bit of the other. You come up with something magical, that’s a rare combination that really hits the nail on the head. Like Rub n Tug is for me.

That’s a good question. I should email you that. I’m quite excited and that’s pretty rare for me. I do hear some nice pieces.
Posted by beta at 6:43 AM