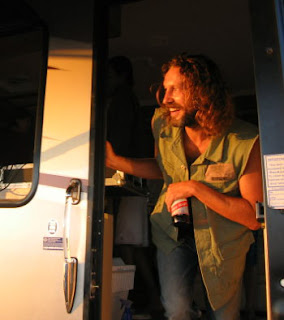 My interview with veteran DJ Harvey, who revitalized the art of the edit with his crucial Black Cock Edits in the early 90s, may've been the heaviest casualty of the SPIN space crunch. As the man is an original punk rocker, many cans of worms were opened about punk/ disco that simply could not be addressed in the piece.

So, is there a disco revival?

Is there a secret history, to where it surfaces slightly and then goes back underground?

I'm just looking at disco-edits, Italo-disco, space-disco, Balearic stuff, a catch-all, really. Though you’re at the vantage point where you can see it come and go.

I dunno. It came and then it never went. Just after the so-called ‘death of disco,’ when they were blowing up records at baseball stadiums and shit, the Paradise Garage opened. Just when it was supposed to go back in the water, it ‘peaked.’

I was talking to someone about the differences in 1977 between punk and disco.

The same? (laughs). Coming from a hardcore perspective... In the UK, they were closer aligned, but US punk, it didn’t deal with disco. I love to give US punk a hard time. they love to hate British punk as well, especially in California. As punks, we would love disco, because you weren’t supposed to. As a real punk, you were always contrary. I don’t want to dump on (laughs) those cats, cuz they feel very passionate about their scene, but punk, you gotta be contrary. If you’ve fallen into a part-time punk, then that’s not punk.

Punk’s a state of mind, like disco. They’re actually very closely linked, just as an expression of freedom, through the dance and dressing up.

You were originally a drummer.

I made a record in ’78, with a punk band called Ersatz.

You came over and found hip-hop parties then?

In ’85, we went in search of hip-hop. We heard these imports coming in. The Clash were hanging with Futura. That was the sort of original connection. Me and my buddy walked up Manhattan to the Bronx to find hip-hop. You know? That was a fun afternoon, in the park in ’85 brudda, wooooh!

You came back to disco through the breaks?

I just remember in SNF, the first thing John Travolta says is like “Fuck you, you cunt!” (he says, “Fuck the Future”), and it was like “WOOOOOOW!” He was a young punk in his own world. It’s hard to pin it down, they are together. If you watch The Great Rock’n’Roll Swindle, you got the Sex Pistols and Tavares jamming in the club together. It’s very close. It’s just the contrariness of punk and the joy of disco go hand-in-hand really. I think, especially with the new, electroclash and stuff like that, brought kids who never considered themselves or listened to house music, now digging the cosmic sound. It’s re-connected. Blondie with Grandmaster Flash. "Queen of the Rappin’ Scene" was an interesting moment.

Were you in NYC?

I hung out for a minute in ’85. I had a girlfriend on 5th Ave. I OD’ed on Ecstasy. We were still hip-hopping it, it was all E and that whole kind of thing. I’ve never lived in New York and don’t think I could. It takes its toll on my liver. I love to come and love the city. It’s obviously changed, it’s a quaint village these days (he he he). We used to bomb the trains, hit the trains and shit. That’s all calmed down a little. You’ve got this nexus of this world…taking it in an art school direction. It was stinky back then. You had to get real dirty and risk your life to be a graffiti artist.

At what point were you checking out the Loft?

Not in those days. We went to pretty much every decent club, except the Paradise Garage. We were looking for hip-hop, not disco. I didn’t get to the Loft until the early 90s. I’m drifting off here.

Do you see rock and disco as two separate ends of a spectrum?

Not at all. Every great rock band that existed made a disco record. Jerry Hall coming back from Studio 54, bugging Mick Jagger: “Make something we can dance to!” Rock’n’roll is a form of dance music. In the 50s: “It’s the beat daddy-o, it’s the jungle rhythm.” It’s very closely related. I find that genres tend to help journalists pin down a certain movement, whether it’s rock, punk, or disco. It taps into the same spirit.

I would like to cut across that. It’s a rhythmic flow, rather than a genre per se. Anyone that survived the sixties was making a disco record by the end of the seventies.

What about your series of Black Cock edits? Thom Bullock (of Rub'n'Tug) credited you with bringing that back. How did that come about?

Becoming friends with Larry Levan. We hung out, he had various edit tracks I couldn’t get my hands on. So we just decided to do our own. Danny Krivit was around, there was, I dunno, there were few other people doing that. The only way we could get our hands on that stuff was to do it ourselves. That’s how the whole Black Cock thing came about. We started off cutting tape, how Danny used to do it. I got my hands on a very early hard drive, like 4 MB, you could get 4-6 minutes of music, get the little soundwave and cut the stuff on the Atari computer.

The first things were done on tape, the later ones were done on the computer. In recent times, it’s something people forget. Editing is not an easy way to make a record. People have ruined a whole bunch of records by extending the breaks too long. What makes a break so great is the shit that comes just before it. if you don’t have that, then the break doesn’t have the impact it may have had.

The story of it.

Yeah. I’ve often considered taking a record with a fantastic break and actually editing that out of it, and just repeating the crappy part. Just so everyone is waiting for this thing to happen and that actually doesn’t and you hold people’s anxiety.

They never get to orgasm.

Is that edit scene overcrowded?

Everything becomes like that eventually. There’s the good and bad and you wade through and find what suits your needs. There’s almost a genre of disco-edits.

Um…nobody. (Laughs). Nobody springs to mind. Danny Krivit, Paul Simpson is really my main influence in editing. His stuff is absolutely phenomenal. Walter Gibbons and Tom Moulton are who I look to. People haven’t really captured it in modern times. An easy way to do something. Paul Simpson is a bit of a forgotten hero.

I haven’t heard his name mentioned.

His early stuff is phenomenal. I’m trying to think someone in modern times where I’ve gone “WOOOOOW!” it’s not that I don’t play them or that they don’t get you there.

A little bit. People don’t put quite enough effort into it.

The computer makes it too easy?

It’s easy to attempt, but it’s not easy to get right with computer technology. There’s less excuses now. tape editing is laborious, hard, it can take days and days to cut the tape. You can make a simple edit these days in a good evening. It’s not the end of the world there’s a bunch of pretty average edits out there. It’s not like I stay awake worrying about the sad state of disco.

What do you worry about then?

What do I stay awake about? Romance and stuff.

Tell me about it. That never gets easier.

That’s the key. A little love, a little romance, that’s what’s worth staying awake at night for.
Posted by beta at 9:12 PM