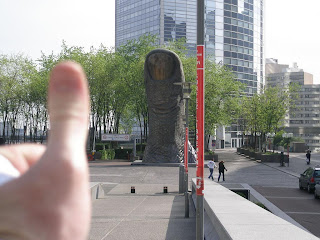 I can't think of a more debilitating injury (and dose of poetic justice) to have befall me than a bum thumb, which is what I've been dealing with the past couple of weeks. When I went to see my doctor, Dr. Webb, MD, s/he diagnosed it as either gout, arthritis, skiier's thumb, or an inflamed tendon. I opted for the latter.

Regardless, I was wholly without use of my right hand for a good two weeks, making the mere act of holding a pen in my hand feel like it was a marshmellow roasting over an open campfire. Some activities greatly affected: meal preparation, going to the gym, washing dishes, journaling, text-messaging, thumb-wrestling, opening doors, pulling on clothes, pulling off clothes, hitting deadlines, flossing. Oh right, and blogging.
Posted by beta at 5:34 PM 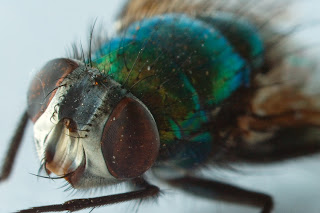 Perhaps due to Luc Sante's essay on Buddy Bolden and his tune "Funky Butt" collected in Kill Your Darlings, I re-read Michael Ondaatje's distilled, disquieting book Coming Through Slaughter. Tangentially about Bolden, the legendary New Orleans cornetist who went mad within his music mid-parade, Ondaatje conjures a phantom, in that the only proof of Bolden's existence is to be found on Folkways Records, wherein contemporaries whistle songs of his. In a book filled with billowing, phantasmal imagery, a passage shook me. Bolden has lacerated the face of a colleague and since disappeared. A friend looking for him tracks down the victim, motionless in a dope din:

He found Pickett in the room of flies. The air damp and thick. He had to practically sweep the flies off his face and hair.
...
He did this. Pickett clapped his hands near his face so the flies left it for a moment and then settled back.

That vision suddenly parallels something else I've recently reviewed, a DVD entitled The Pink Floyd & Syd Barrett Story. Of course, most of said DVD is bereft of Syd, instead showing members of Pink Floyd talking about how they wrote "Shine On You Crazy Diamond" (about as appealing as listening to Wynton Marsalis performing Bolden numbers like "Funky Butt" and "If You Don't Shake, Don't Get No Cake," I reckon). At one point, one of Syd's drummers says that there were "no flies on Syd," meaning that he may've just been acting crazy. He then has an epiphany on-camera, realizing that Syd drew flies on the cover of Barrett! Ah, drummers. 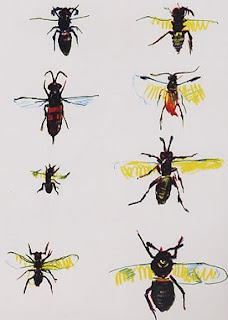 The film struggles with the problem of how do you make a documentary of a disappearer? There are quick snatches of the band making the "Oik! Oik!" "Doy! Doy!" noises of "Pow R. Toch" live at the UFO Club, but it lasts just a few seconds. There is also home movie footage of Syd disintegrating and reveling in the clutches of his first LSD trip, fistfuls of mushrooms in his loosening grip. Even when there is a scrap of footage of Syd flecking at his guitar, in his black hole eyes, he's already vanished. Past that, we are given lots of visual metaphors for mental illness: empty rooms, shaky handheld cameras down hallways, slo-mo scans of both.

Empty rooms figure prominently in Coming Through Slaughter as well:

If you don't shake, don't get no cake.

...
Recent reads that extend the metaphors: a story about the death of Disco D, and the death of honeybees.
Posted by beta at 7:41 AM 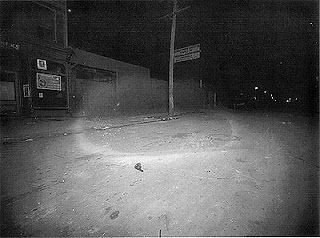 You may not be anticipating it yet, but the forthcoming collection of essays from Luc Sante is killer (which is apt, since it is entitled Kill All Your Darlings and of course, this was the man whose book Evidence looks at old bloody crime scenes with fresh eyes). Reading Low Life was revelatory, if revelatory can mean eternally bummed by the realization that the New York that I now reside in is by far the safest, cleanest, least suicidal, weakest, and most boring it's ever been in its history.

I wrote a brief feature on Sante for a forthcoming issue of Paste Magazine, but wound up using little of our email discussion. And so here's the bulk of our exchange.

I get curious. Usually I have some fairly nebulous questions--nebulous in that they're not articulated and also that they're not particularly rectilinear. That is, I'm not going to find the answer clearly stated, or in any one particular place. Very often they have to do with the emotional gestalt of a particular time and place. I'm always launching the time machine. For some reason, the historical timeline is my underlying reference. I'm the only person I know who arranges his books in chronological order.

Writing about specific people sharpens the focus, since I can see such things through their eyes. Of the subjects covered in the book, some (Rimbaud, Dylan, Magritte, Evans) are obsessions that go back to adolescence, while others (Hugo, Mapplethorpe) I learned about as a consequence of the assignment. But with pieces as big as the last two, the subjects aren't chosen idly. I knew enough about them to have nagging questions that prompted me to want to know more.

I'm writing a book about Paris. It was my agent's idea, but it's perfect: a true lifelong obsession. I won't really know what it's about or where it's going until I'm finished--I'm sort of an idiot savant, never knowing what it is I mean until I've gotten to the end of the sentence. It's not a history, really, and it's sure not a travelogue or an explanation. I'm slapping together a lot of old obsessions (the serial novel, the Commune, the underworld, Surrealism, movies, the Situationists) with some things that are relatively new to me. It does have something to do with Utopia.

I'm obsessed with the past (see above), in particular the 19th and 20th centuries. I'm interested in the present, but when I stopped being young, some time ago, I dropped out of the loop. Right now I am doing some catching up--most of the people I talk to frequently are somewhat younger than me, which helps.

Times Square is a theme attraction, the LES is a theme attraction, etc. I think of the term "dive bar," which seems to refer to bars that wish to project an ambience that resembles that of the popular idea of deadfalls from the past. It's calculated. The bars I frequented in NYC in the past were dives, period. They'd been that way for years and nobody planned it or ever thought of doing so, and you can still find bars like that in certain less favored cities. The change since 2000 seems incremental. A momentum began in the middle '80s and has just been proceeding along the same road. Money and congestion are the primary motifs. On the other hand, I'm really unable to find much specifically post-9/11 change to speak of, beyond the stuff that affects the whole western world.

On things feeling old: I may be living in a different world than you, I don't know. Smoking is busy reappearing among a lot of people I know, for example. Giuliani, on the other hand--well, he is running for prez, so not irrelevant these days, but there's also the fact that I haven't personally experienced any of Bloomberg. Things do quicken up, but that has the hidden benefit of allowing things and people to make multiple stage appearances over time, instead of splashing and fizzling.

Who am I catching up on? Well, primarily all the French stuff I mentioned in my last message. Especially Rivette (me and 200 other people, that is). I'm reviewing the Original Scroll of Kerouac's On the Road (last read the book itself in 9th grade) and I'm really caught up in it, a bit to my surprise. The songs in heaviest rotation at my house are Mos Def's "Crime and Medicine" and Sizzla's "Don't Be Sad" (yeah, I know, I always get to things late). And very belatedly I've discovered the Go-Betweens. 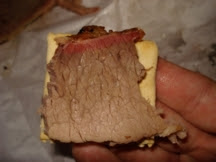 Finally made it to Hill Country, yet another attempt by Yanks to recreate the singular experience of southern barbecue. While a BBQ joint in Brooklyn attempted such a thing (Fette Sau on Metropolitan Ave.), the layer of gristle comprising my beef rib and the sarsaparilla bottled a few blocks away, not to mention the "Southern Pride" convection oven that served as their "smoker," was an abject failure, Hill Country does mimic the green green grass of home. It helps that they base it on the venerated Kreuz Market in Lockhart, Texas, which means that the mark is set so high that even falling well short still counts as a success of sorts. Seriously, how do you compete with a place that posts a manifesto like this at the door? 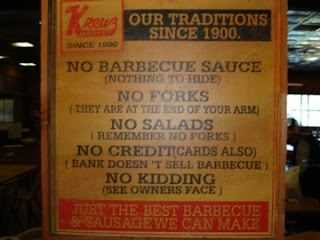 As I approach the Flatiron hotbed, I must admit the scent of smoke is comforting. And the pits in use here are cute indeed (even if they are 1/150th the size of deployed at Kreuz). Piled atop a saltine cracker, the Hill Country-smoked "moist" brisket is about as evocative of my uncle's smoke pit as I can find in the 212 area code.

My dining companion then asks: "But do they serve a Kreuz Margarita at Kreuz?" Hunh? "Do they really make mixed drinks with Big Red?" What? A guava mojito arrives in a mason jar, much like the booze did at Fette Sau. Not to gripe, but I feel that I should break some news: Southerners Don't Drink Out of Mason Jars! We don't. Most restaurants down in Texas instead pretend that they are chic New York establishments. So it goes.

Everything needs a gimmick these days to work though, be it concerts or restaurants or trend articles. New York Magazine has to proclaim "BBQ is the New Hamburger!" You probably couldn't swing a restaurant investor unless you have such a gimmick (all the food is pink!), much less convince an editor to run a story unless you make parse it as a new trend. As my companion and I lament such hooks and ploys, imagining a future of more trite and blatant gimmicks, she casts an eerie prediction: "Soon, we'll all be living in a world of wrestlers."
Posted by beta at 6:58 AM 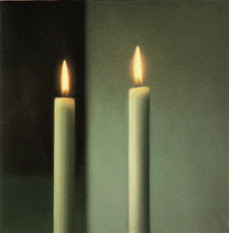 My original title for this piece was "Rather Ripped Van Winkle," which perpetuated both the dreamy weirdness of that band playing the entire album live while also reinforcing the act of getting blotto'd that informed both the album itself (see Byron Coley liners expose "Silver Rocket," "Devil's Daughter" and "Joni" as hooch slang) and my teen listening habits.

It's a gimmick of course, and it's doubtful McCarren Pool would have been such a sardine can without the premise of recreating something canonical like Daydream Nation. Otherwise, who would go to hear songs from "Rather Ripped"? Seems a shame that Rock the Bells couldn't swing something similar with Public Enemy (reforming that same night on Randall's Island) and arrange for the performance of It Takes a Nation of Millions to Hold Us Back, seeing that Chuck and Flavor Flav were but a few miles north of the Greenpoint Necklace. A friend and I have already decided that this should be the next album re-created live, alongside Drive Like Jehu's Yank Crime and Pharcyde's Bizarre Ride II the Pharcyde.

So, was Daydream Nation good, you might ask? Bad? Such distinctions seem wholly irrelevant when discussing something as subjective as Sonic Youth's lexicon, to the point where it is an integral aspect of my musical chemistry. I mean, was puberty good/ bad? Was it Superbad? The only thing I kept wishing for was that Kim would've changed the lyrics to "Eliminator Jr." so that it went: "Take a walk through McCarren Park? SHIT YEAH!"
Posted by beta at 11:30 AM