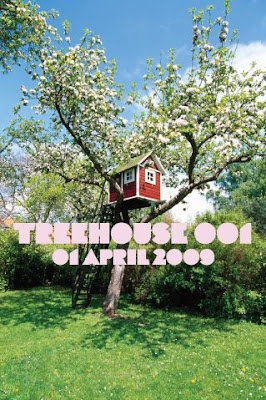 Announcing Treehouse, a monthly-ish party being thrown down with pals Eric and Piotr, which kicks off this Wednesday, April First (no foolin'), at this lovely neighborhood bar in Ft. Greene right next to BAM, Frank's Cocktail Lounge (660 Fulton St. @ S. Elliott Pl.). Oh, we also have a secret special guest who really is both secret and special. Admission is $5 and I commence playing Arthur Russell's "Treehouse" precisely at nine.
Posted by beta at 10:26 AM 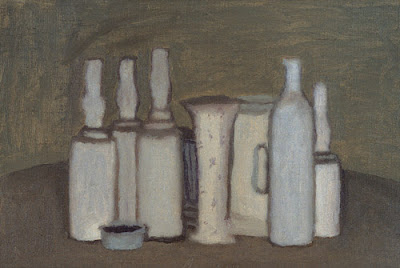 I can't say that at this point I'll ever get around to reading David Foster Wallace's Infinite Jest. Time spent with Ulysses, Gravity's Rainbow, The Magus, 2666, and Stephen King's It was more than enough, thank you. But to read about Wallace's failed struggles with his last unfinished work, tackling "boredom," fascinates me regardless. As The New Yorker's story encapsulated this "Long Thing," left stacked in the garage while Wallace swung from the patio rafters, it was a failed attempt to capture that ennui that infuses our modern Western existence, a task once thought by Wallace that "properly handled, boredom can be an antidote to our national dependence on entertainment." The article has Wallace diving headlong into an IRS office in "flyover country," as what could be more boring than that? 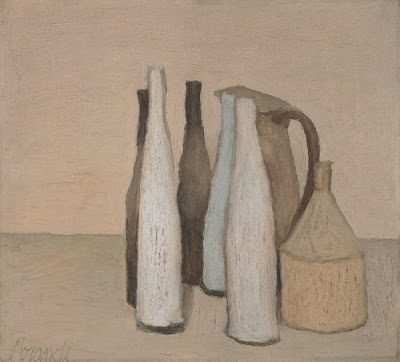 And yet, he thinks that transcendence and godhead can somehow be gleaned out there: "Bliss --a-second-by-second joy and gratitude at the gift of being alive, conscious-- lies on the other side of crushing, crushing boredom. Pay close attention to the most tedious thing you can find (Tax Returns, Televised Golf) and, in waves, a boredom like you've never known will wash over you and just about kill you. Ride these out, and it's like stepping from black and white into color. Like water after days in the desert. Instant bliss in every atom." 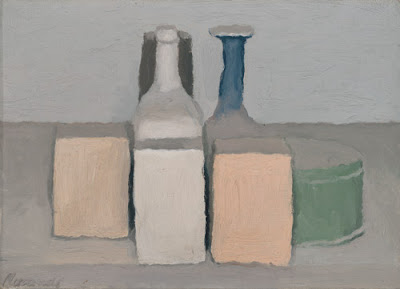 Which is well and good in a wholly intellectual and imaginary world, but as I myself have spent time in such an environment (back when I was a claims rep for a Social Security office in middle America) it's almost unbelievable to think that a grown-up could fantasize about answers lying in some branch office. When I was in those bureaucratic purgatories though, I too became obsessed with "boredom," its pervasive, paralyzing powers and sought to somehow capture the daily routine that devoured my every waking hour and made anxious my attempts to sleep and restore my energies for the next day of it. I would attempt to dredge up some moments from that time in my life here, but my mind has completely eradicated it from recall, pulverizing any trace of knowledge about such governmental Gordian knot policy and procedure such as the LSDP and the M.DOS maze navigated for each and every claim. Knowing what little I do about his bio, I do know that Wallace never had to submit to such drone work to support a family, to pay the bills, to finance his home. And in the end, neither did I, which is why I got the FUCK out. Which is why those people are there in the first place. Even as he immersed himself in the codings of the IRS, it remained a game, not a necessity. 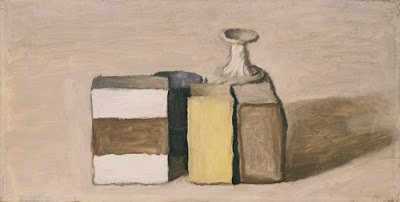 And yet I attempted, in my earliest story-writing efforts, to try and get that boredom down, to leave in what gets left out of fiction, to where a paragraph could deaden your senses, to where time slowed, paralyzed by the drudgery of office work. Having to mete out when you took a coffee break, or a smoke break, to try and interstice that purgatory in some small way. I used to schedule bathroom breaks strategically, hiding in the stall and writing out bits of poetry, grocery lists, to-do lists, postcards, anything to try and fight the blinding glaze of tile floors, echoing hallways, perpetually-filtered air that never escapes its climate-controlled confines, heavily-tinted windows that make even a sunny day seem overcast when glimpsed from deep inside the filing cabinet catacombs. It soon became evident that rather than attempt such an alchemical art motion, instead I had to escape that environment completely, lest I lose my grip on sanity. 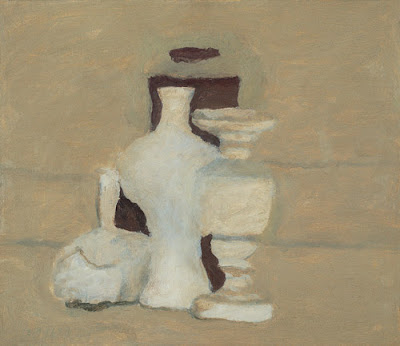 At the same time I'm reading about Wallace's struggles to glean art from the quotidian, I'm also reading a study of art visionary Robert Irwin. Irwin talks about eight months he spent on the island of Ibiza, pre-foam parties, in the mid-50s, when the islands were still uninhabited:

In the everyday world, you're just plugged into all the possibilities. Every time you get bored, you plug yourself in somewhere: you call somebody up, you pick up a magazine, a book, you go to a movie, anything. And all of that becomes your identity, the way in which you're alive. You identify yourself in terms of all that. Well, what was happening to me on the way to Ibiza was that I was pulling all those plugs out, one at a time...And boredom then becomes extremely painful. You really are bored and alone and vulnerable in the sense of having no outside supports in terms of your own being. But when you get them all pulled out, a little period goes by, and then it's absolutely serene, it's terrific. 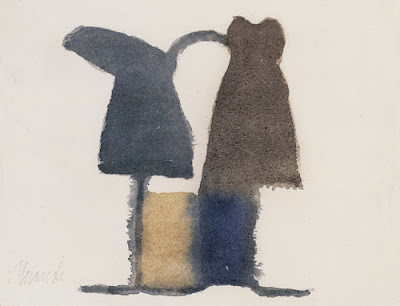 At first glance, his "absolutely serene" seemingly echoes Wallace's sentiments about "instant bliss in every atom." And yet they differ crucially. An inspiration for Irwin in the realm of painting comes from a curious place, that of an Italian painter Giorgio Morandi who ostensibly did still-lifes of glass bottles and pitchers, over and over again. "What Giorgio Morandi did there was to take the same subject to the point of total boredom, to the point where there was no way you could seriously any long be involved with them as ideas or topics. I mean, through sheer repetition he entirely drained them of that kind of meaning."

Irwin talks about boredom as a discipline in and of itself, be it sitting out on an island or else in his studio for fifteen hours a day, letting his social network and marriage dissolve as he sought out the root of his investigations by staring at a line on a canvas:

Boredom is a very good tool. Because whenever you play creative games, what you normally do is you bring to the situation all your aspirations, all your assumptions, all your ambitions --all your stuff. And then you pile it up on your painting, reading into the painting all the things you want it to be...Boredom's a great way to break that. You do the same thing over and over and over again, until you're bored stiff with it. Then all your illusions, aspirations, everything drains off. And now what you see is what you get. 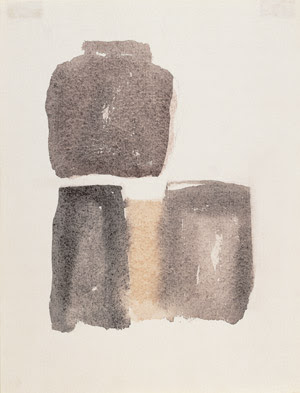 Re-reading the excerpted "Wiggle Room," a slog of a short story by Wallace that accompanies the article, it feels as if everything has been drained off of it and yet the illusions remain intact. Instead we have placards of characters spouting about the history of the words " boredom" and "interesting," tracing them back to old dictionaries, things that no drone in no office would ever utter, much less bother to learn about. It feels like Wallace, locked in an office, not in Ibiza. At the end of the excerpt, the main character looks at a portrait of his little baby boy and there's no trace of feeling to be gleaned from the page. There really is nothing left. But that's not boredom, that's death.
Posted by beta at 8:01 AM 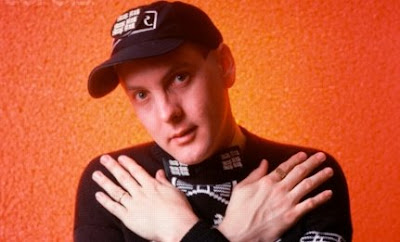 Not to get all Nic Cage Knowing, but...

It started innocently enough. Because of a theatrical screening of Cheap Trick: Live at Budokan, my friend and I realized that the most deadly drinking game could be played along with this concert. Every time guitarist Rick Nielsen pops up the brim on his ball cap during the concert, you have to drink. And seeing as how he pops it thirty-plus times in an hour, the B.A.C. levels soon turn deadly.

Recounting this drinking game for an acquaintance of ours (and wondering why in the world Nielsen was such a jittery freak on-stage), he tells a story about how he was friends with Rick Nielsen's son growing up, and that Nielsen's coke habit was painfully evident even to a youngster. Upon receiving a gift of a Chicago Cubs ball cap, our friend recounts that Nielsen disappeared in the bathroom so as to go "try on the Cubs cap," returning a good ten minutes later. While none of us do blow anymore, we coined the phrase "trying on a Cubs cap" to be the new code word for doing coke.

It fell away for awhile, at least until the day the Times ran this photo of Rod Blagojevich hiding his male pattern-ness with --what else? 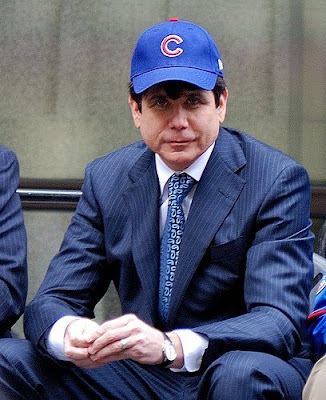 And still, I didn't want to see the broader implications. But a throwaway line in the recent New Yorker article on David Foster Wallace's struggle with depression and suicide gave me pause:

Wallace joined the debate and glee clubs, and smoked a lot of pot with friends. One day, though, toward the end of his sophomore year, Costello walked into their dorm room to find Wallace sitting alone, slumped over, his gray Samsonite suitcase between his legs, a Chicago Cubs cap on his head. "I have to go home," he told Costello. "Something's wrong with me." 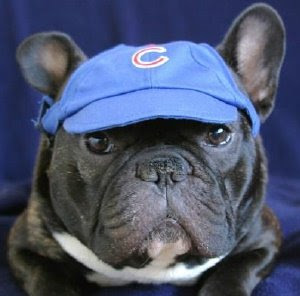 Labels: trying on a cubs cap 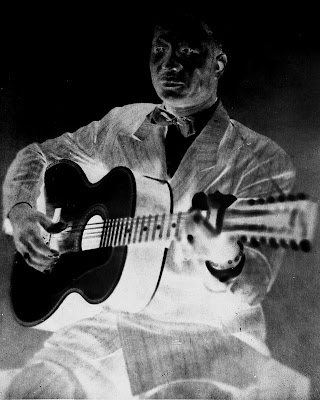 This only applies if you are walking about New York City (foolishly believing that spring is just around the corner), but a story I wrote about Lead Belly obsessive John Reynolds (whose lifelong enamoring of the man recently resulted in Steidl's massive tome Lead Belly: A Life in Pictures) is in The Onion this week. While the hefty book is a tactile delight, another sweet aspect of doing this interview is that Reynolds graced me with a Danish Souper Bag, which is ideal for toting non-Lead Belly records around town.
Posted by beta at 12:52 PM 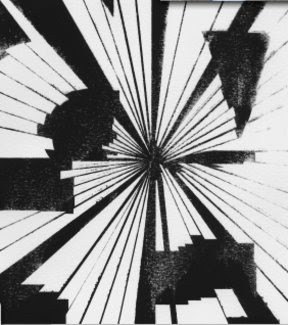 Rounding out a trilogy (of sorts) on the disco edit scene, this week in the Voice is a feature on the RVNG Intl. imprint. And since these things pretty much disappear the moment they come out, thought I'd share one of the edits that finds its way into my "Afro" sets the most, one by Mock & Toof of Shina Williams & His African Percussionists' "Agboju Logun," off of that loooong OOP Nigeria comp on Strut. Dig it: 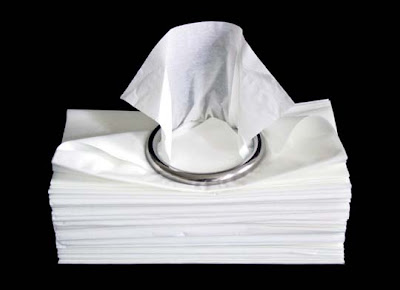 Within hours of listening to the delirium-inducing Fever Ray album, I came down with chills, aches, and a 102° temperature. Coincidence?

(Well, I guess it could be, as the Fever Ray cdr that my friend handed to me also had this Conny Plank-produced Whodini song called "Nasty Lady" tacked on at the end. And that song is the sickness, too.)
Posted by beta at 3:38 PM