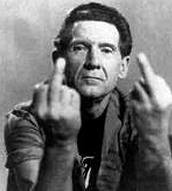 I'm putting off reviewing an indie band insipidly called What Made Milwaukee Famous to instead listen to the Killer sing that song. What's that Saul Bellow quote about stealing only what you're stong enough to carry out?

Only then does it strike me that I'll be seeing the Killer tonight. Which means preparing to get my head stove in by the septuagenarian's Cuban heels with clips like this:


Jerry Lee had his own show?

Now to stare at the 10 CD Bear Family box set and read Amazon reviews like: "Rocking country with The Killer. You will get in good mood on an saturday evenig with this cd,an cold bear and a woman."
Posted by beta at 11:06 AM 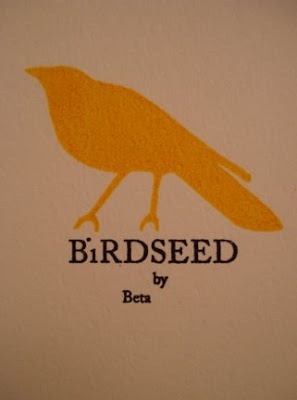 After being out of print for nearly a year, I have finally had a moment to reprint and sew up a second (and final) run of my BiRDSEED chapbook. As I wrote here when I finished the first run:

BiRDSEED is culled from observations, unfinished poems, scribbled notes, shopping lists, overheard dialogue, and other small bits recorded in the calendar year of 2005, whether it be in Brooklyn, Costa Rica, Austria, or Texas...I had a pet canary at the time who would scatter seed husks and hulls over papers that sat out too long, an image that you can see in the pages themselves.

These handmade books are $5 and are the absolute last copies, so please drop a note if you're interested. Thanks.
Posted by beta at 8:48 AM 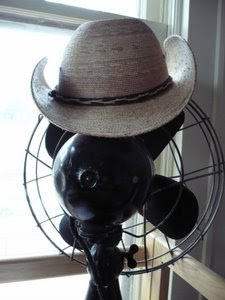 Once again I'm a big fan of the SXSW experience, downing free tacos and Shiner, visiting family and friends, all under the guise of doing work for Idolator.

Day Four Part Two
wherein I leave SXSW and spend even more time eating tacos and barbecue
Posted by beta at 10:12 AM 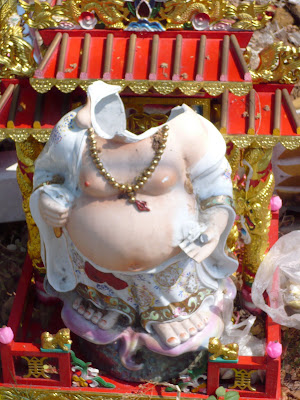 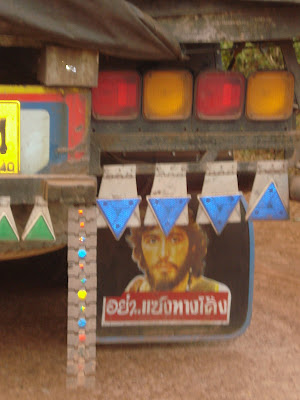 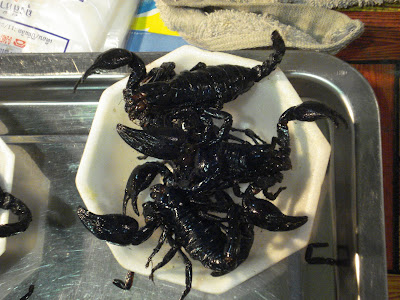 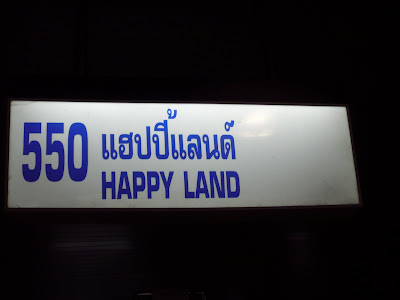 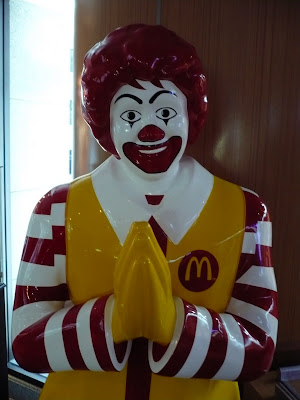 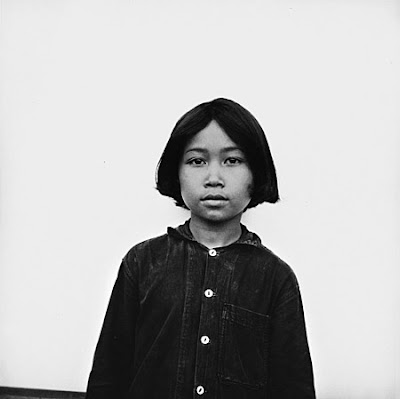 "The Book" tells you that seeing a family of four seated atop a passing motor scooter is one of the top ten sights in all of SE Asia. A friend glibly states: "I'll be impressed when I see five." Does carrying a mattress, copper piping, or a pig count? How about three giant pale-skinned farang squeezed onto one instead, wobbling down the traffic sign-less, stoplight-free streets? Well, the Khmer love a good joke.

On a day --when I was neither Rambo-ing Cambodian hookers nor foolishly taking photographs of ghosts-- I found myself squeezed onto the back of a moto, with two teachers. Sans helmet, my eyes, beard, and hair accrue Cambodian snow, the paved roads left behind five minutes outside of town. Turning down one road, passing muddy canals, we arrive at two recently-painted sheds. One building teaches teenage girls how to sew garments, so that they might earn a living in a sweatshop, rather than entering into the lucrative field of prostitution. The other has the words ENGLISH SCHOOL spray-painted on the outside. Today, I help teach English words to a classroom of Khmer children.

As with many encounters in Cambodia, the intensity is of such a heart-juicing/ brain-grinding strain that it somehow maintains an air of normalcy. The kids race out to practice their English. "Hello, how are you?" When I ask in turn, the reply invariably goes slightly aslant: "I am happy," they all respond. Happy? Amid crippling poverty, hunger, and corruption?

I get told afterwards that many of the kids have been orphaned, their parents lost to AIDS. Outside of Africa, Cambodia has the highest rate of AIDS, with nearly 3% of the population infected. While they seem small enough to be at most 6 years of age in my guesstimation, many are twelve or above, malnutrition stunting their growth.

The games they play are almost as inscrutable. One involves sliding their sandals along the cement, in some strange variant of croquet or something. Can’t figure it out. nor can I figure out their variant of jump rope. We English teachers cluelessly deem it "the string game," but it could just as easily be some version of limbo, played with a rope of rubber bands, pulled taut. But it's sorta like hopscotch and HORSE, too.

Girls are far more adept at this than the boys. It involves hooking your toes on the cord, bending it down and executing a series of jump moves, which everyone else follows, the string rising ever higher. At game's end, the girls execute astounding falling backward overhead kicks, their sandals on their hands as they do handplants to catch the string.

Inside, they chant again and again "This is a _______" as we point at the blackboard, wall, floor, eraser, chair, building up that vocab. Where the kids border on the ecstatic though is when we do a rousing rendition of "Head Shoulders Knees and Toes." Class ends on a high note with a performance of the Countdown Kids' big hit "I'm H-A-P-P-Y." Maybe that's where they get it from?
Posted by beta at 2:21 PM 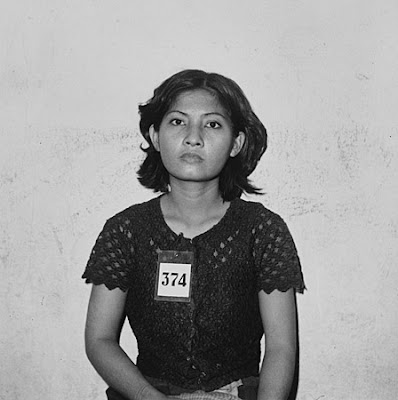 Every adult Khmer male --be they passengers on a rattling public bus, tuk-tuk drivers, tour guides, or guesthouse proprietors-- and no matter the innocuous circumstances of our conversation, at some point offer us women. It comes after being offered rides on tuk-uk and smoke-smoke, always 'cheap-cheap' for us. There are but two destinations: the Killing Fields and the shooting range. "You shoot AK-47," they say in their pitch. "You shoot rocket launcher, $200." For a few dollars more, you can shoot at a live chicken.

Due to the geography of these Phnom Penh tourist attractions, the usual circuit has the Killing Fields as the first stop. Tour buses idle at nearly the same spot as did the Khmer Rouge trucks that carried all the doctors, teachers, and educated urbanites out here some thirty years ago to be brained by wagon axles and garden hoes and turned into longan orchard fertilizer. And after you view the stupa stacked high with eight-thousand human skulls, you can mingle amid the butterflies and birds or perhaps take shade under the tree that they once smashed babies against. The sun blazes overhead; your skeleton shivers.

It is as you depart that the tuk-tuk drivers will inevitably pop the question: "You go to shooting range now? Shoot AK-47?"

To offset the gauntlets of English-speaking hustlers who offer Khmer women to us farang, we take a new tact, rather than simply answering "No thank you." Instead, friends and I answer brightly, "Yesyesyes, we want women for boom-boom." Gesturing the boom-boom act to show how badly we want to experience the "real Cambodia," we then add our lone stipulation, our hands shaking with pantomimed recoil. "We want boom-boom. And we shoot woman with AK-47, okay?" This elicits huge belly laughs from every would-be pimp.
Posted by beta at 7:29 PM 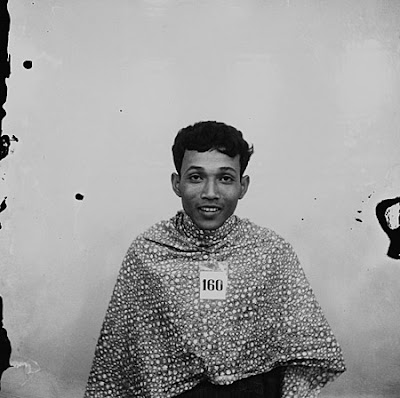 A partial inventory of pictures irretrievably lost when my camera was stolen:

-a series detailing the profound amounts of trash to be found throughout the country, prompting this quip: "Show me a stretch of land that is without heaps of plastic trash and I'll show you the still-warm ashes of a trash fire"

-a clandestine shot of my six-fingered taxi driver

-skulls from the Killing Fields that resemble egg incubators

-photos of fried critters in the market, including giant black tarantulas

-a cow strolling on the beach

-a friend licking a syringe found on the beach at Otres

-a devastating seven-shot series of portraits from Tuol Sleng Museum of unnamed womens' mugshots (before their execution out in said Fields), the moisture, sun, and mold having already erased their faces from human memory
Posted by beta at 4:07 PM