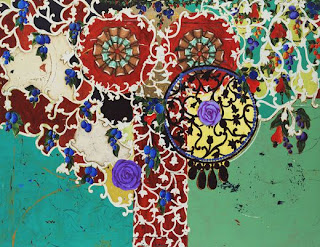 Having recently written a piece about the foolishness of asking a question like "What is (insert genre tag)?" I wasn't really holding my breath on the sixth-floor of the MOMA, at an exhibit entitled "What is Painting?". I mean, there was still the powerful Richard Serra exhibit to attend to, his Sculpture Garden pieces sizzling in the sunlight. And last time I was at the MoMA, the curation wasn't so hot.

Separated from the process of the work itself, such artistic investigating by artists is usually a fruitless endeavor (for a similar parallel, see that section of Paper Thin Walls when musicians rate other musicians, handing out 10.0s and 9.5s like Halloween candy and shouting "Yay Everything!"), and in the initial rooms, I was underwhelmed. Each room revolved around a theme (portraits, color schema, painting/ not painting) that seemed trite in its organization. Who I did recognize seemed to be poorly represented, the paintings by no-brainers Andy Warhol, Gerhard Richter, and Chuck Close feeling perfunctory at best.

With each successive room though, the work grew stronger, and most surprisingly, the paintings that reverberated the most were also the most recently rendered. I became giddy at the work done by heretofore unknowns as Wade Guyton, Gabriel Orozco, Elaine Reichek, Shirazeh Houshiary, and Beatriz Milhazes. While most exposure to modern art radiates process, color wheel, and long-stewed theory first and foremost, their work exhibited here thankfully answers the question proposed by eschewing it completely and making it moot. The work exuded a real sense of play and discovery. 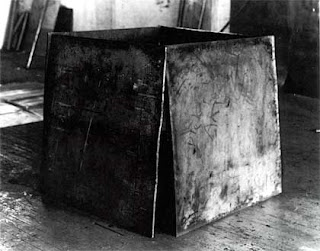 Such giddiness and playfulness poured over into the Richard Serra exhibit. How does his overwhelming work not strip away all postures of human importance, of control, of adulthood? Walking through Band, Sequence, and Torqued Torus Inversion, all recently rendered works, I became as a child again: my body weak, wobbly, uncertain of the world surrounding. Dwarfed by 20 foot tall slabs of weathered steel, you can't help but be cowed by their demands. As knee-buckling as El Duque's curveball, or else like an inner-ear affliction, the viewer becomes unbalanced, disoriented, shrunk, helpless.

Such sensations lead to a freedom though. I am a child again, gazing in wonder and seeing the infinite in rusted industrial metal. In the way that Serra's formative early work suggests such possibilities (who else could make lead look so at ease, light and graceful?), I find myself at play among such immensity. My friend and I play "Shoot 'Em Up" amidst the stoic slabs of Equal-Parallel: Guernica-Bengasi, bounce our throats off of the reverberating contours of Band, delighting in the echoes and decay. The curvature and contours appear to be conquerable; inviting but ultimately untenable. Despite not partaking in such recreational activities, I find myself wishing that Serra would get out of the art world and instead draft some monochromatic first-person shooters or else design impossible skate parks.
Posted by beta at 8:13 AM 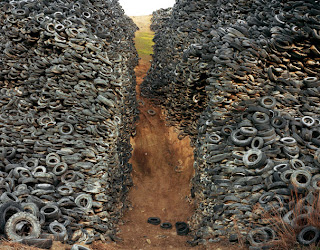 Manufactured Landscapes dir. Jennifer Baichwal
While I wish the emphasis of this at-times powerful documentary on photographer Edward Burtynsky was less on what he thinks and more on what he sees (and hope the DVD would option no commentary), this is still a moving piece of cinema. Once focused on the coal-dug landscapes of Pennsylvania, Burtynsky now documents the industrial revolution in China. The digital grain of the camera often times cannot bear the infinite scenes being captured: fan factories in Beijing, tanker-disassembly in Bangladesh, where computers go to die and be hammered apart in abjectly destitute Chinese villages, to where the screen takes on the gauze of a mirage.

The minutiae of everyday objects are shown in the mysterious origins. It takes a good five documented movements before the viewer realizes that irons are being assembled. Visual vignettes integrate into greater themes: tires, parking lots that stretch to the horizon, knots of overpasses without escape, the scum of oil at the bottom of an abandoned tanker. The opening scan is dizzying, the mind unable to grasp the immensity of the factory, unable to locate itself in the space without walls or vanishing point. Can such human hives exist? Only my rotating fan tells me so.

Tees
In a ten-minute span, I espy a tee shirt featuring Swedish jazz guitarist Terje Rypdal's album Waves and one featuring Don Cherry's overlooked Where is Brooklyn?, replete with neon font. Find it odd that while Blue Note stocks shirts based on album designs by the likes of forgotten trombonist Grachan Moncur III and temporal tenorman "Tina" Brooks, they can't keep the actual albums in print.

Animal Collective @ South Seaport
"I thought they were an indie-rock band," I overhear someone say in the sardine can that is the AC show out on the pier. Alas, not a guitar is in sight. Instead, the trio of Avey Tare, Panda Bear, and Geologist (with the lanky Deacon chillaxin' on the wings) hunch over knobs for most of the show. Tunes that should be familiar (like "Leaf House") are rendered unrecognizable, reverberating to the point of dissolution. As the Collective is wont to do when it's time to metamorphose, they look to their brethren in the Black Dice, as well as the dub section of their record collection. And while one snatch of lyric is about "wearing flowers in your hair," this set is a rockers' soundclash for indie rockers.

Oneida @ Sound Fix
I have Oh My Rockness! to thank for hepping me that the mighty O. were playing three shows on "Fat Bobby Returns to New York Weekend" as a five piece, including someone on clarinet(?!). As Oneida fans are already resigned to them never ruling the universe, they are now free to actually rule the universe. Lots of new songs, with inclusion of "History's Great Navigators" and "Lavender." The first time I've ever seen them not play "Summerland." Come September first, they'll have been together ten years.

La Cravate dir. Alejandro Jodorowsky
Found in a German's attic and wedged into the recent Jodorwosky boxset as the man's true debut, before El Topo and Fando y Lis, I wish it would've stayed put like Anne Frank (too much to hope for Sante Sangre instead?). Anyone who doubted that the psychedelic Jodorowsky got his start in miming will find ample proof here. Gaudy in colors, simplistic in its execution, La Cravate is basically a tale of facelifts, decapitation, and soul-killing, rendered for children. I do however, like the man's lesson that "enlightenment doesn't exist."

Ace in the Hole dir. Billy Wilder
This Criterion Collection advance just arrived in the mail, commenting on the media feeding frenzy and dovetailing nicely with that recent breaking news story about some poor blonde girl that was buried alive in a well. Didn't eat for 28 days or something. What was her name again? Knew it was someone important.

Ratatouille dir. Brad Bird
Directly proportional: the most hilarious moments are also the most skin-shivering.

Pink Flag/ Dad Rock
Mike and I bond over how "Reuters" on Pink Flag always makes us tear up. As does "Pink Flag" at the end of side one.

Stemming from this accusation about Vampire Weekend making "music for dads," I ask for clarification on what "Dad Rock" actually sounds like: "You mean it sounds like Map of Africa?"
Posted by beta at 8:30 AM