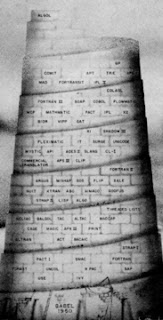 In the Shadow of No Tower
An "industry" piece.

In the winter of 1992, I made my first visit to New York. My body had never ventured that far north before, and it had never experienced such a chill. I became deliriously sick upon arrival, wholly unprepared for such weather (no scarf, no gloves, no wool cap). I was forced to wear the mitts of my young cousin, childlike gloves that barely reached past my thumb. Even now, there was no sensation to equal the brutality of that first wall of wind I felt smack against my body at every turn. Such bluster knifed through my wholly inadequate ski jacket. I was miserable out on the streets.

Most of my trip, I was stuck in the hotel room, weakly gazing out at the Empire State Building's luminance that filled the window. Down below, the Coke sign was but a tiny dance of red lights, the thoroughfare of Broadway like some glow worm. Only a few impressions linger: that New York is bizarrely familiar and mistakenly known after years of witnessing it on TV; that's not steam coming out of those manhole covers. I did nothing touristy, save for a few exceptions: Times Square (bought a porno rag), CBGB's (bought a tee), and Tower Records on 4th and B'Way (bought Lysol by the Melvins, Sebadoh's Smash Your Head on the Punk Rock, the Royal Trux album that has a pile of golden bones on the cover).

Upon my arrival in the city nine years on, I had easily jettisoned such landmarks as well as such purchases. Times Square was odious even then and I made the pilgrimmage to Other Music instead, across the street from Tower. What I bought there remains most holy: Cannibal Ox's The Cold Vein, the Parson Sound 2CD set, the Disco Not Disco comp (Arthur Russell's joyous tracks soundtracked those heady first months). Still, it was a curious sensation to have the other two institutions slip away last year, though kin more to the passing of your grandmother's neighbor than anything of real resonance. And yet, I knew that they weren't anything other than shadows of a time and place already passed even when I was a tourist. No show at CB's, I bought the namebrand. The titles at Tower could've been found at the Tower in Austin. It was just the pilgrimage itself, the buying of relics. I went exclusively for the ghosts, to hear the echoes of something already dead and cold in the earth.
Posted by beta at 11:43 AM 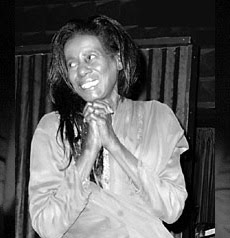 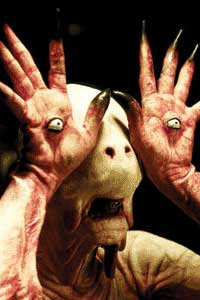 What, me see a movie from the 21st century?
In Michael Hall's recent article on the reclusive, silent to the point of seeming retired Erykah Badu in this month's Texas Monthly, he notes a "giant, red, mazelike circle painted on the floor at her feet. 'Actually, it's not a maze,' (Badu) said. "A maze is designed to puzzle. It's a labyrinth -- there's one entrance and one way to the center. It kind of looks like a brain. It's very meditative.'"

Malcolm Gladwell's article on Enron in the New Yorker theorizes on whether or not the company's shareholder fraudulence was a puzzle or else a mystery, using national-security expert Gregory Treverton's distinction between the two: puzzles don't have enough information, mysteries too much. He uses the location of Osama bin Laden as an example of the former, the chaotic aftermath of ousting Saddam Hussein for the latter. Gladwell states "Mysteries require judgments and the assessment of uncertainty," adding that they deal with a deluge of information and mis-information, to where facts themselves obfuscate and render the truth murky.

Not to just divulge whatever I've been reading while on the elliptical machine at the gym, running in place, but such mazes manifest themselves on the big screen as well. (No, I'm not talking Pan's Labyrinth, as I haven't seen it yet). Take for example a movie I watched the other night, Jules Dassin’s Night and the City, from 1950. It's a quintessential film noir by a director forced to flee Cold War Hollywood so as to avoid testifying and being blacklisted (got it, darkness). The main character in almost any film noir becomes the urban milieu itself, its skyscrapers, anonymous apartment buildings, and alleys a breeding ground for shadows, prurience, those malefic sides of humanity not glimpsed in daylight.

Night and the City is part of Dassin’s urban landscape triumvirate (along with New York City in Naked City (1948) and Paris for his masterpiece, 1955's Rififi). Here, his London is not just a shadowy, still shell-shocked locale, which essayist Paul Arthur describes as “post-war, pre-apocalyptic, and bereft of hope” but an “urban labyrinth” from which there is no escape for its character. Familiar to him at the film's outset, by the end, even these shadowy routes becomes unfamiliar, foreboding terrain. The known slides back into the unknown.

And it need not be exterior either. What Dassin and others had projected onto the outside world in the 50s had reverted towards the interior by the 70s. Labyrinths were as personal as intestines. Movies that were once puzzles began to shade towards being mysteries. I re-watch Nicolas Roeg’s masterpiece Bad Timing (my previous viewing), a psychological drama from 1979 between three people, rendered by Art Garfunkel, Theresa Russell, and Harvey Keitel. From the opening credits, Roeg's balletic editing overloads our senses with scenes out of order, impressionistic rather than linear. Whereas a film like The Naked City gives us little information in which to solve the murder, Bad Timing overloads us with clues. We must sort them out for ourselves. The audience gets displaced instantly, forced to forge its way, to order all of the sensations: Klimt's Kiss, ambulances, Russell's coma, East Europe checkpoints, shenai trance music, poppy red colors, excerpts from The Köln Concert, it all dizzies the head and gets you lost in it. Near the film's middle, we see that both Garfunkel and Keitel’s characters have framed portraits of a labyrinth hanging on their walls; they gaze at the design. Do they see themselves inside it? 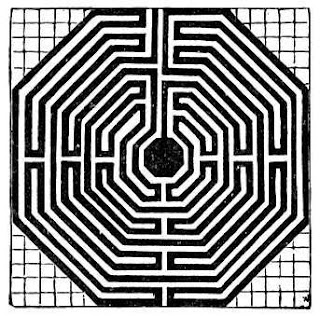 Last night, a few friends convene on the Robert Altman Remembered series still playing at IFC Center to watch his unheralded 3 Women from 1977. Here too, three characters blend and bleed together, entangled and interconnected beneath the veneer of reality that shows them as separate. And boy is this Altman movie ever underappreciated: the print shown tonight is in complete disrepair. The opening credits looking more like a Stan Brakhage short, all dust, hair, and scratches both horizontal and vertical. The sound itself crackles like a dusty Joni Mitchell record. It’s so distracting that I almost miss the pan of the opening shot: it’s of the pregnant artist Willie’s latest mural. Of course, the first thing visible amid Altman’s impressionistic washes of rose and amethyst, almost a vision arising out of the desert sand, is…a labyrinth. To top it off, Björk is in attendance as well.

At this point, it all verges on information overload. It cripples any entry. What route do I want to take here? Am I concerned with Malcolm Gladwell's latest theory or else film noir landscapes? Erykah Badu or Björk? What thought doesn’t curl into cul-de-sac? Someone who has recently read my blog tells me that she doesn’t understand it at all. Well, neither do I. It almost makes me laugh, though I don’t ask if she sees me as a puzzle or a mystery.

Am I in the art of withholding information or giving a deluge of it instead? It only looks public and outward, this solipsistic art. And while I may not be writing much here of late, there is a great deal of writing going on. (Hall's article reveals that Badu has some 80 songs done, as well as a futuristic concept album that was later scrapped by her.) With new possibilities looming on the horizon yet not actualized just yet, I have spent a great amount of time in this new year taking true stories and fictionalizing them. Scarcely leaving the house for the most part.

It’s a curious act to render real experience into something less known. Events that I once knew to have happened now are vague. Even though I knew these people, I have little idea as to what will happen in this new framework and must work it out. I find myself getting lost in the once-familiar terrain of my life. Am I just choosing to see so many mazes in my work? Looking back at Gladwell's "Open Secrets" article, I realize that I had underlined a passage: "if you can't find the truth in a mystery...it's your fault as well."

Either way, I am hard at work. And it’s not for nothing that when I look up the word in question, I see the Middle English spelling for labyrinth is ‘laborintus.’
Posted by beta at 9:45 AM 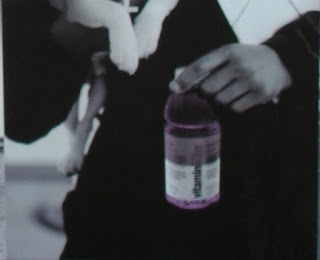 ...but maybe not this bottle.

International Sad Hits
Posted by beta at 7:25 AM