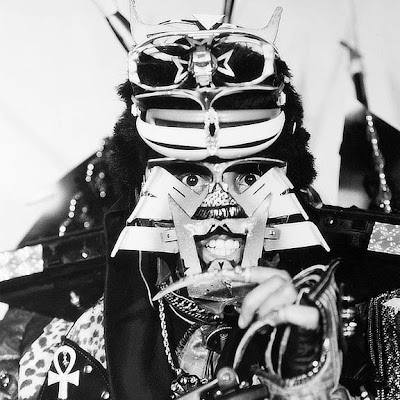 A few years ago, I queried at Pitchfork about the man's totemic 12" "Beat Bop": "If "Rapper's Delight" is the Odyssey of hip-hop, is "Beat Bop" its Ulysses?" To which the answer is an unequivocal yes. If you haven't picked up my friend Dave Tompkins's head-swimming How to Wreck a Nice Beach book, do yourself a solid, if only to get observations like this on Rammellzee:


Rapper, diver, sinister masked man, dentist, jeweler, letter defender, quantum engineer, painter. Toy encoder, toy assassin...His childhood distrust of the Catholic Church tops a list of aversions that includes mayonnaise and the word whatever. "He's a genius," says director Jim Jarmusch. "The kind of guy you could talk to for twenty minutes and your whole life could change, if you could only understand him." 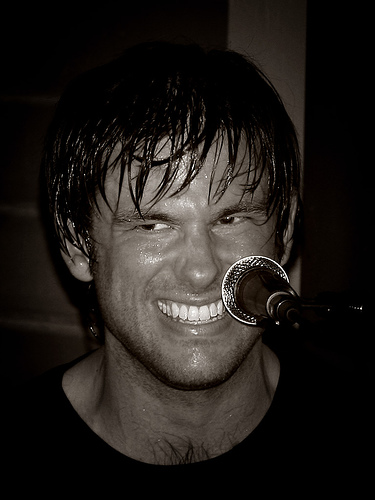 While the living artistic example of Oneida's Kid Millions has always been a revelation/ inspiration to me, I'm still taken aback by the sheer power of his new solo drum album, Man Forever. The Times piece on the project is an enlightening read (as well as a much deserved profile of one of Brooklyn's most profound musicians), with this section being my favorite two-sentence approximation of the man/drum dervish:

But behind the drums his baby face transforms into a kabuki demon, and he becomes a blur of pounding limbs. “He has a very special way of playing drums, as if he were guzzling something very tasty,” Yoshimi, a drummer in the Boredoms, wrote.
Posted by beta at 1:54 PM 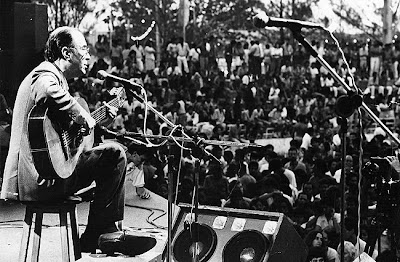 With each annual Jazz Fest, I lacerate myself for not spending the exorbitant sum for tickets to see bossa nova maestro João Gilberto perform, his artistic stature undiminished. And when JVC pulled out of sponsorship and shuttered the festival last year, I was certain that my fate was sealed. Now I would never see the man perform. But with the festival's revival this year, I realized that pr string pulling is an art made specifically for such an occasion and was all set for tonight's show at Carnegie Hall. Until this email came through:


NEW YORK, NY, June 21, 2010 – Due to international travel regulations beyond the producer’s and artist’s control, the Joao Gilberto concert scheduled for the CareFusion Jazz Festival New York at Carnegie Hall on Tuesday, June 22, at 8:00 pm has been canceled.
Foiled again. 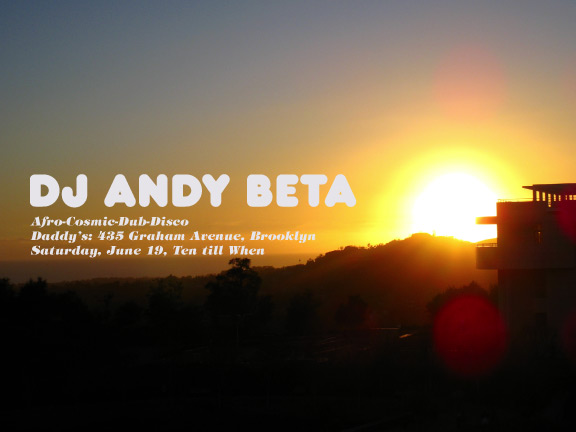 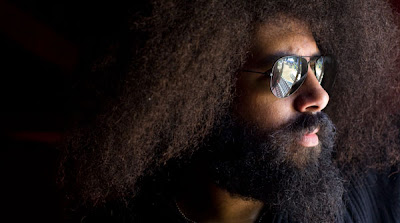 From the excellent Sam Anderson profile on musician/ comedian/ enigmatic beardo that is Reggie Watts in New York Mag from a few weeks ago:


He talks about the process of improv in quasi-mystical terms, as a kind of spiritual jazz—a way to honor the world through mindfulness. All his ideas come, he says, from being alert to his environment and opening his mind to something he refers to as “the Source.”

“Improvising music has helped me a lot,” he said. “Music is very similar to comedy: It’s all about texture, timing, context, vocabulary, performance. When someone’s onstage doing a solo, essentially it’s the same thing as what a comedian does. They’re in the moment. They’re listening. The environment is giving you stuff constantly: a woman yelling something, an animal making a weird sound in the forest, a window being rolled up, static on a radio. Someone turns to you and says something in the same key as the radio. If you pay attention to the world, it’s an amazing place. If you don’t, it’s whatever you think it is.” 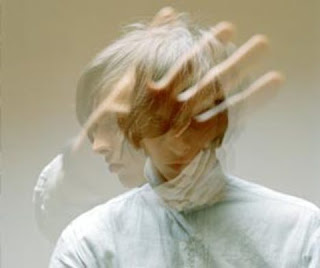 Last week, I got to do a very brief interview with Hendrik Weber, a/k/a Pantha du Prince. We chatted about the dark, efficient works of Georges Simenon (which we both wound up reading on our respective vacations), The Glass Bead Game (to which I recommended James Blackshaw's album of the same name), and a few other things.
Posted by beta at 7:32 AM 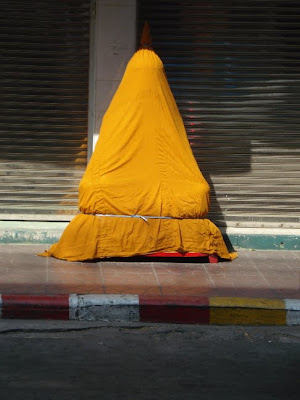 A few winters ago, I traveled to China for a piece and from there decided to traipse through Southeast Asia for a few months more. My head filled with the type of astounding music being unearthed in that part of the world by the Sublime Frequencies imprint, I was on the lookout for such musical encounters when I arrived in Thailand. We walked the night markets, in search of records, totally unaware of what might be great and what would be treacle, and came away with nothing. But one night, we could hear the thud of bass, the chirp of singing, and pushed deeper into the market, past the blankets laid over the parking lots, towards a hastily-erected stage in the middle of the concrete lot. 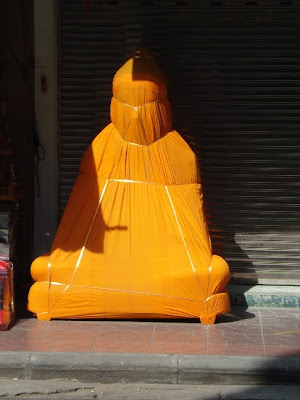 At first glance, it seemed like the real deal, a concert of Thai music. As we got closer, it instead looked like the world's mightiest karaoke soundsystem, complete with film flashing behind the singers. Only as my friends and I drew towards the crowd though did the onslaught of red flags, banners, and shirts denote something much different: a rally in support of exiled prime minister Thaksin Shinawatra. So as news about the violent rioting in Bangkok and rising death toll rolls out, I am struck by how such a small, inconsequential thing grew since my departure, to the point of death, fire and destruction. I still worry about my friends and the peaceful strangers I encountered at every turn there, yet communicating with fellow travelers who are still there, few could say much about the turmoil. 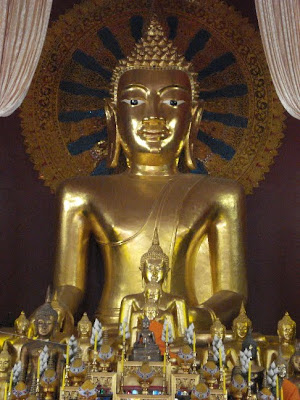 Talking with a budding Buddhist the other day and her vision of travel there, I realized that the country remains this slate for westerners to impart their own vision upon. Even a Times piece unpacks the notion of democracy in part of that world, how Thailand has to be an example of such governance. Our insistence on it being such a beacon pressurizes the strife. There were many places I stayed where it seemed the town had been overrun by expats simply seeking a space without an identity that they could practice their spirituality or dietary concerns in, rarely venturing into the Thai society around them. So even as such atrocities rage on, a piece about how tourists in Phuket remain oblivious to the violence isn't all that shocking either. And yet I still think of returning there, of finishing myriad short stories begun there about the search for spirituality within that country's folds, and how outsiders continue to think that peace and serenity resides there (or the young women to make into passive wives). Who there can hear the gunshots?
Posted by beta at 9:46 AM 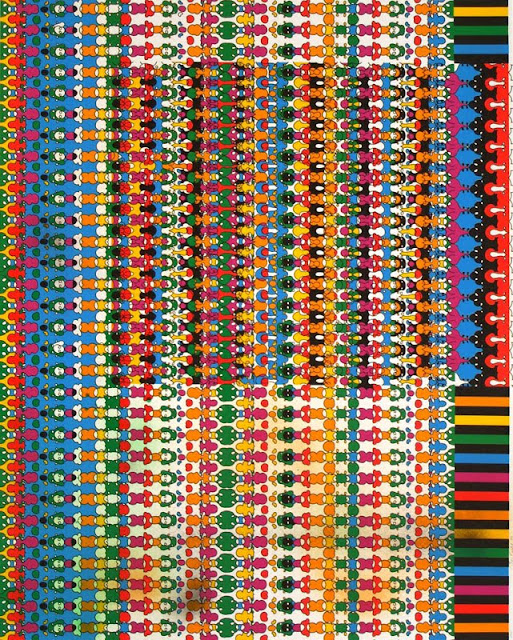 My interview with Black Dice's Bjorn Copeland appears in this month's edition of Theme Magazine, which was curated by Hisham Bharoocha.
Posted by beta at 9:23 AM 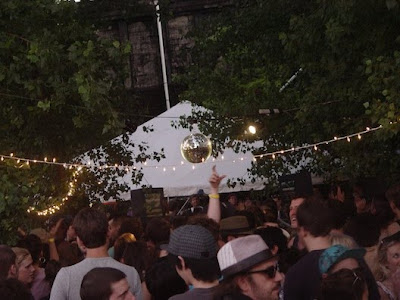 Damn. Not even a week after my feature on the Sunday Best party, which kicked off along the Gowanus Canal over the Memorial Day weekend (peep the "Where's Beta?" party pic from their site), it was announced that the landowner was no longer honoring the lease and shuttered the party one week into their third season. Truly devastating news, as that three-block jaunt from my house to dancefloor bliss had become one of my favorite summertime activities.
Posted by beta at 5:32 PM