Fascinating oral history of Oneida recording Each One, Teach One at the turn of the 21st century over at Drowned in Sound. Lots of fine memories, but this tale is truly "wish you were there" style:


I feel like we played somewhere like Chattanooga, where there was almost no one at the bar, and there was a carnival in town. So at the bar were these scrappy old carnies, like scary dudes with one tooth and a wild look in their eyes. Not a ton of people, I’m talking 15 dudes from a carnival [laughs]. And maybe two other people, a bartender, three fans, and the band we were touring with. So we went up there and played this song ["Sheets of Easter"] for 15 minutes, and I think it pissed them off but also made them happy. I remember them stomping around the room thinking we were saying “die, die, die,” these crazy old hillbilly carny men going “die, die, die,” doing Monty Python-style goose-stepping walks around the room.

Drone-minimalism, as succinctly explained by Keef:


If you're working the right chord, you can hear this other chord going on behind it, which actually you're not playing. It's there. It defies logic. And it's just lying there saying: "Fuck me." 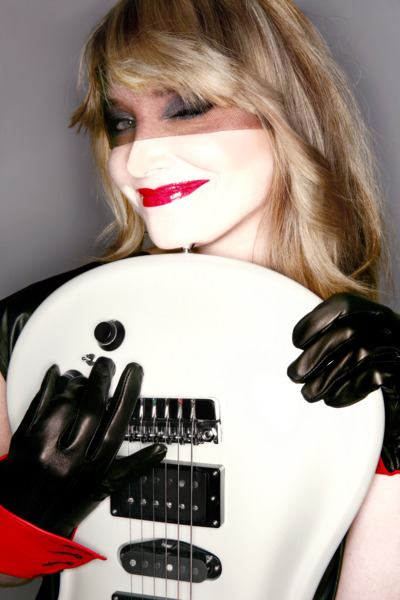 Last week, a feature I wrote on "she-shredders" for the Wall Street Journal, which entailed sitting down with guitarist Marnie Stern to discuss a song like "Female Guitarists Are the New Black" and all the other baggage that comes with the territory. She bid me head to the Upper East Side and meet her at an ale house around the corner from her apartment. As she sipped an iced coffee and smoked Parliaments (careful to flick the butts way out onto the street), she talked about her failures in finding a male guitarist that could nail the parts to her new songs. We chatted about this topic and other things as well:

It was different awhile back for women. There weren’t many women doing it. Or at least, they could feel the currents against them. I never felt that. Thankfully, it’s because of Kill Rock Stars, Sleater-Kinney, that whole Riot Grrrl movement, helped make it possible for me to not think about it. So I never have, which is great, I think. I just wanted to become a good player and see good musicians. Take Ex-Models, I like seeing bands like that and feeling that they were so good. See, bands like Ex-Models, Hella, Lightning Bolt, and seeing them and just going home and practice, practice, practice.
It didn’t seem like a boys club?
No, that’s just good music. You can see wanking up there and it’s just garbage. But when it’s the music itself, the energy…that’s the thing. I only get inspired when it’s good music. I’m trying to make good music. I don’t want to just be good to be good, I want to put it in a song. That’s the whole point. When I see those bands that I love. At the same time, I remember going to see Erase Errata and thinking they were amazing and not thinking they were women up there. I thought they were neat. Of course, whatever gender you are plays a role in how you approach the instrument. But it’s not gender, it’s the person. See, it’s a difficult thing to have someone ask “what’s it like to be a girl playing guitar?” Well, I can’t tell you, I’ve never been a boy. I know how my brain works and what my make-up is.
Who were your models to look up to, as a female?
(Silence for ten seconds) Nancy Wilson of Heart. Kim Gordon. Um…see it’s different though. Debbie Harry. My perception when I was younger was rolled up with image. I wouldn’t be able to tell you the difference between Madonna and Debbie Harry.
I feel like women have to engage with the image in order to have success.
So I’m learning. It’s hard when you start thinking about it in that way to dissect it. I get asked this question constantly. Generally, you can tell when a person is good at their instrument. You can tell a lot by their control and movement. What I think is interesting is that women are very good with coordination. Women are very organized. And part of the technical side of playing is brain organization. A lot of women play classical piano and classical guitar, which is fucking insane. That’s even harder than rock guitar. It’s just not amplified. i get asked why women aren’t doing shreddy stuff. It’s a hard thing to ask me. I don’t ask my girlfriends why they don’t like the shreddy sound. It just sound tacky or not beautiful or boring to them.
Your style evokes “Eruption” or “Thunderstruck,” the most masculine rock imaginable.
It’s so bizarre. I know in theory it’s “masculine,” but because I’m me, it’s not masculine to my ears. It’s just fun. I don’t think of it as masculine. It sounds cool and fun and big. These are all masculine things. Maybe I’m really lucky in the way I was raised. Maybe I’m dumb? I never thought about it. Even when I was in 6th grade and I watched GnR, I just thought it was cool, not masculine. Seeing Patti Smith was the same way. I didn’t think of her as a woman onstage.
In the 90s there’s female bands, bands with female bassists. But the exception never quite became the rule.
I’m sure a lot of it is a response to the trend in music. I can imagine if the trend in music was big 70s or 80s rock, I would be revolted. There are certain aspects of image that women did have to portray that is so absurd and unattractive. For women, the association with that is off-putting.
You have to wear fishnets.
Right. Everything is referential to what you know and listen to and like in your life. I guess that’s called “post-modern.” One person who’s never listened to experimental noise bands can hear this record of mine and think it’s crazy. And people from that world would think it’s really straight-forward. People will only hear Van Halen and not know that I’m referencing these newer bands. When my mom hears the songs, she likes this record a lot more. It’s more catchy, I remember them, she says.
Why is it just your name for the third album?
I like the songs a lot. It felt much more personal to me and I felt like this record was very reflective of who I am as a person, good or bad. Even when I was doing interviews a few months ago, I was just a mess and really forthcoming in interviews. When you start to heal and you look back, you go “woah.” I would like to come out of that little group of “guitar player.” I don’t know if I want to be considered a Joanna Newsom, but someone who is good at their instrument yet transcends it with song. When people listen, they hear a lot of guitar. Zach’s drums are everywhere so it sounds busier than it is.
But Joanna doesn’t arise from a lineage of iconic male harpists.
Yeah.

To kick off CMJ 2010, my pal Rotter scored huge and got us in to see the legendary Swamp Fox, Tony Joe White. It is a known quantity that I love the man, so it's always a thrill to see him turn concrete into swamp. In an hour-long set, we got one instance of polk (which the locavores still aren't chomp-chomping on) and three instances of silk stockings in song. Which is three times more than I'll hear all CMJ-long.
Posted by beta at 8:58 AM

Shredding the Definition of the Guitar Hero 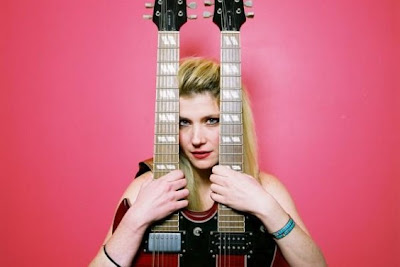 Today, my first feature for the Wall Street Journal appeared in print and it's about three of my favorite guitarists right now: Marnie Stern, Marissa Paternoster of Screaming Females, and Sarah Lipstate of Noveller. You can read the piece here. These interviews were enlightening for me, in terms of who inspired them over the years (Nancy Wilson, Kim Gordon, Lydia Lunch respectively) and the sorts of scrutiny (and media attention) they ultimately get for being women. Discussing gender is not very easy for me (white male), so it was a great challenge to strike the right tone in the piece.
Posted by beta at 3:09 PM

A sampling of drunken exchanges with the DJ

"Hi. Can you plug in my iPhone so that we can hear Leo Sayer's 'I Feel Like Dancing'?"

"(Pauses in deep contemplation) Yes. I do remember it."

"Can you play Chromeo?"

"We've played nothing but talk box songs for the last hour."

"Yeah, but I'm trying to impress this girl."

"You know, if you played the Beach Boys right now, everyone in this bar would start singing."

I wrote a feature for Resident Advisor about one of New York's most idiosyncratic dance music labels of the moment, Golf Channel. They released that monstrous Mark E edit of Janet Jackson a few years back and have continue to deliver the goods since then. Like this track. But the piece also doubles as a history of New York's sweetest, seediest dance party of the past decade, No Ordinary Monkey.
Posted by beta at 9:31 AM