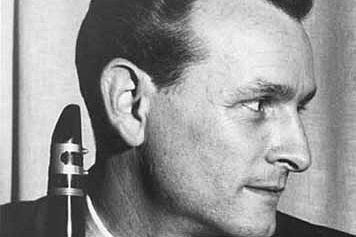 For all the passing of iconoclasts not just in recent months (Klaus Dinger, Jules Dassin, Richard Widmark, Mikey Dread) but in recent years (Alice Coltrane, Arthur Lee, Syd Barrett) the obit in the New York Times announcing the departure of Jimmy Giuffre resounds within my own shell of mortality the most. I cannot specifically name why I feel as so, save that the sound of Giuffre's clarinet was a rare beauty in this world. Last year, when I pitched a few ideas for Stop Smiling's Jazz Issue, the forgotten Giuffre was foremost among them.

I could type about how Giuffre's playing influenced jazz men like John Zorn and Evan Parker, or that works like "Four Brothers" (the first multi-track jazz recording) is part of the Smithsonian collection, that "The Train and the River" opens epochal documentary Jazz on a Summer's Day and influenced folk like Bert Jansch and Tim Buckley, or how his appreciation for Claude Debussy led to a chamber group form of jazz, or that he eschewed piano before Sonny Rollins (or even his student and fellow Texan Ornette Coleman) did, but it's that singular music he created that remains at the end of this day.

The day after I heard the news, a long-searched for eBay item, the out of print ECM set Jimmy Giuffre 3: 1961, arrived in the mail and has been drifting through my house eversince, its space and somber, introspective mood perfect for these days of drizzle. What made Giuffre's death even more uncanny for me was that just the week before, I had had a conversation with this jazz guitarist about Giuffre's sublime trios (with Jim Hall and Bob Brookmeyer in its earliest incarnation, with Steve Swallow and Paul Bley a bit later on) as we drove through upstate New York on our way to Western Massachusetts. Our destination? Deerfield, which is where Mr. Giuffre passed away last Thursday. 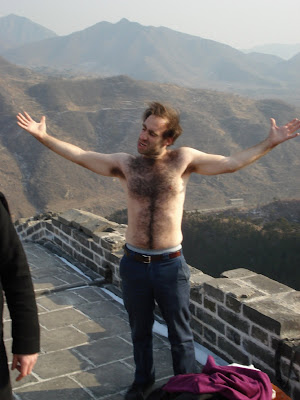 "Great Wall of Fire," my tour diary (but not my title) with Brooklyn's Ex Models is FINALLY out in the May issue of SPIN!
Posted by beta at 3:35 PM 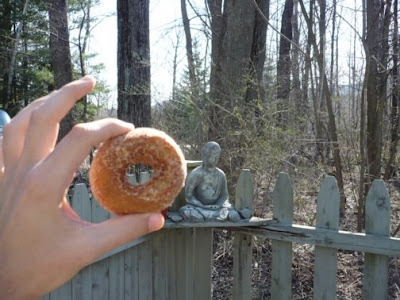 In addition to writing about the Chinese rock scene, I also delved into the Chinese doughnut scene, which is even more hardcore. I wrote about it all for my friend the Blognut. In the upcoming weeks, I'll have reports from Thailand and Laos, but here is the three-part installment on China: 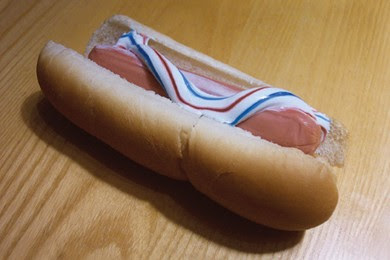 Been spending some time reading The Believer's Book of Writers Talking to Writers for a myriad of reasons. None of which wound up being reinforcement of that sublime resignation to my fate of writing the remainder of my days, though Grace Paley's advice is fine indeed: "Keep a low overhead. You're not going to make alot of money." Also: "Don't live with a person who doesn't respect your work."

Another non-reason was having writers comment on the curious state of journalism, an endeavor that I spend most of my days working at (and being taxed by) yet spending very little mental currency on. Joan Didion's tales about the '88 campaign trail is most fascinating, as is the note in the Haruki Murakami interview that his most "malevolent figure...is a sort of professional interviewee...(equating) his facility with the media (and the slipperiness of his opinions) with his evil and soullessness. (Saying that) if a person is too good at opening his mouth in public he's empty inside."

Then there's Daphne Beal's interview with Janet Malcolm: "One of the things that journalists come to understand after doing journalism for a while is the power of the question...It isn't only Diane Arbus who betrays the subjects of her photographs. Most people who have their picture taken hate the result. And most people who are the subjects of newspaper or magazine stories feel at least a little wronged if not outright betrayed. "
DB: "How do you reconcile the 'not-niceness' of the finished piece with...asking your subject for his or her trust?"
JM: "You do not reconcile it. That is the moral problem of journalism. But journalists don't ask for the subject's trust--they don't have to. Subjects just give it. They are eager to tell their story and don't seem to realize that they are not invisible as they tell it."
Posted by beta at 7:26 AM 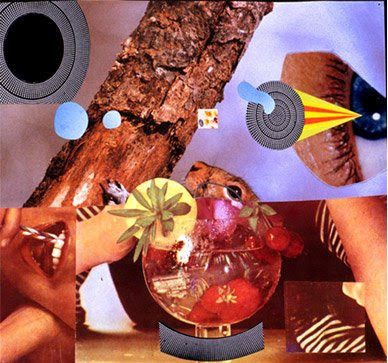 Fuck Buttons
Dudes, sorry it took so long to get back to you. Here is that info you requested:

David Berman
Listening to Gene Clark the other day, lamenting how it has come to pass that Gram Parsons gets his two records reissued every three years, while all of Gene's are only available in Germany or Japan, it dawned on me that he's just too smart to ever fit into the country or country-rock paradigm. Same goes for Mickey Newbury. Too dense and profound in their words and lyrics, so that they sink rather than float. Country likes clever, but not illuminating.

And while I've never been a Silver Jews fan, listening to his newest, I feel similarly. Only, I really love Gene Clark and Mickey Newbury. That said, in person David Berman is a hoot. He tells a story about how needle-dropping Pavement would get strippers to stop dancing and cover themselves up (Slanted and Enchanted did teach me to detest my own body) and best of all, Berman enlightened me about a recent pastime of his.

Joanna Newsom
Part of this Paper Magazine arty for "Beautiful People" or some such. I stood next to Bjork and Matthew Barney. I wanted to ask if they had ever seen Luang Pu's sculpture park in Thailand, but I demurred. Joanna plays two songs on piano, the sound rife with feedback and beautiful people chattering. No magic.

Later, my Drag City friends and I balked at joining Joanna's table, as she was surrounded by Bjork and a few other beautiful people. It made me think about John Frankenheimer's movie Seconds, also about "beautiful people."

Interviews to be conducted

A Place to Bury Strangers

I've been re-watching a few of my favorite films, curious as to what some of my original blog entries were on them.

I'm surprised at the copious amounts of blood that get shed in Love Streams. Who doesn't have blood stain their forehead, their hands, the corner of their mouth, their ears at some point here? Also, I forget how fall-down hilarious it is at points. It's both Cassavetes's bloodiest and funniest movie I can recollect. Much like his classic film Husbands, Love Streams only saw release on VHS.

Cassavetes and Rowlands play kooky siblings (though I realize now that fact doesn't surface until 2/3s through the movie), drunk on their notions of love. For her, it's 'the ultimate,' the biggest chip on the table, the greatest bet there is in the universe; for him, love is just about a woman giving up her 'secret' to a man; 'secret' meaning 'lady-yum,' 'man' meaning him. The beginning scenes of him at some weird tranny wine bar with Bob Marley lip-synching and with a mansion full of honeys (peep the one in the swooshing white jumpsuit that just screams Falcon Crest) are brilliant, with John smirking through all the insanity, even as he protests to be sane himself.

Conflicts are like clockwork, all a-grind, continuous, and unresolved even by movie's end. Lovers cannot communicate and neither can generations. Parents and children squabble, the former unable to reign in their crazy tendencies, the latter young but quickly learning to be in such an unstable state, making life miserable for all. The product of divorce, I feel for both the eternally-single man and his abandoned child. You have to be deluded to stay sane.

In a similar on-screen deluge, decisions are quietly --almost imperceptibly-- made by both Robert and Sarah, and whether there is hope of true change, or just irrational hope, the change is decisive, if slight, and the last image of the movie is of our man, soaked from the downpour, behind windows blurry from the everflowing water. It's his last role, and knowing that death is imminent, he waves goodbye, both to his sister and to us.

What can I say about The Gang's All Here, except that it is literally bananas? Boundaries exist only in the audience's mind, with Berkeley flooding the rational with bewildering and vivid sensations. Dosed on Technicolor, my presumed sense of space is constantly blown out, re-evaluation just another rickety shack before the next vibrant gale blows through to expand the scene's parameters once again, time and space rendered meaningless, the idea of a linear plot something that just barely holds it together. Perhaps that's why one tag called it an "apotheosis in vulgarity"? Uncle Samba dances and slinging of war bonds barely hide the mischievous psychedelic glee that shimmies seductively on every number. Yes, there is Benny Goodman (also singing about the war effort), but there's also banana-colored oxen that tow Carmen Miranda into the hallucinatory bananas and "shwaw-bewwies" sequence of "The Lady in the Tutti-Frutti Hat." Insane plantains.

And I'll just leave a description of the children's polka-dot polka turning into a giant manicured hand meditation that reveals a futuristic hula dance (bathed in magenta light that Marian Zazeela must've based her life's work on) with a pink and lime dot dance that defies gravity and time until it crashes into a mélange of petticoats exponentially fracturing via kaleidoscope to the clip below. That Brady Bunch blue screen floating head finale just puts a cherry on top of the banana cream pie.

I understand just why Sansho has been relegated to the lower depths of public consciousness, in that his mastery of understatement, subtlety, and capturing the smallest gestures of the human situation don't shake the seats quite like exploding helicopters. There's not even a samurai showdown. Or a defeat over evil, or a conquering of adversity, of the balm that we ask of all our entertainment. Instead, the film whispers about mercy, murmurs about how "humans have little sympathy for things that don't directly concern them," mentions just once about having closeness to the Buddha, but Mizoguchi's devout Buddhism infuses his later works.

There are no real sparks, but the friction that gives the two hours its sloooow burn arises from how such a small spark of idealism nears extinction in the bluster of this world, lost in its chilly reality. There's an acceptance of brutality by a family broken apart by slave-traders, a near-surrender to fate. A prayer from behind a gate has a slave longing to be "reincarnated rich." The protagonist, Zushio, actually abandons all hope and behaves as his masters do, cruelly branding runaways and leaving the sick to be picked apart by carrion birds so as to curry their favor. Inoculated to their cruelty, it's only in the smallest of kernels that hope continues to flicker and exist.

And go figure, such resilience is expressed through song, a plaint sung by Zushio's mother, separated by the slave trade and kept on an island. Somehow this sung fragment carries across the waves, instilling hope in her imprisoned children when they overhear their names in its coarse melody. The chorus, much like Buddhism itself, acquiesces to that most basic quality of being here and makes it into a mantra: "Isn't life a torture?"
Posted by beta at 7:46 AM