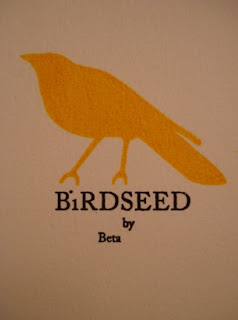 This is the cover of my latest chapbook.

Considering that Beta Blog was initiated earlier this year with a chapbook of poems from Texas, this bookends the year of 2006 for me rather succinctly. Guess I did get a few things done this year. While the Texas book covers 1993-2003, the work contained herein is from 2005. I mentioned it here casually and now it's an actuality.

BiRDSEED is culled from observations, unfinished poems, scribbled notes, shopping lists, overheard dialogue, and other small bits recorded in the calendar year of 2005, whether it be in Brooklyn, Costa Rica, Austria, or Texas. Back when I still had a caged bird singing, papers left lying around my room would accrue strewn birdseed on their surface and so that image informs the lines, words, and the pages themselves. The work is both scattered and compact. Anything can be a cage, be it a bedroom or a subway car or a helicopter or the body itself. Or as I joked to one friend about the work within: hard to crack, easy to swallow.

After the arduous task of editing and laying out the Texas book (ten years to craft, two years to tweak and fuss over, dozens of drafts, plus six months to ink, fold, and sew), BiRDSEED was intended to be a breezy affair. Less suffering oover the lines, things left as is. Of course, laying out the artwork this go-around proved insurmountable, so all praises due to Brooklyn's patron saint of the cover arts. Once again, every copy is individually handmade and wholly unique, from cover to stitching to the surprises contained within each book. Drop a line if you wish to peck at this.
Posted by beta at 7:14 AM

beta out of "last pieces" 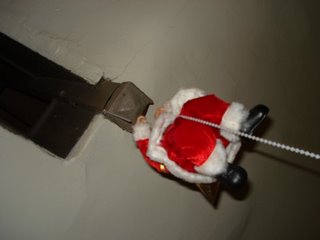 Oneida interview at Paper Thin Walls
Posted by beta at 8:19 AM

from the desk of beta 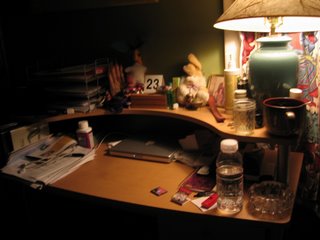 Riff on "Popozão" at Riff Market

Various - The World is Gone

2 or 3 things you know about beta

A saucerful of secrets?

The Blue Velvet Blend probably goes great with homemade cherry pie. Even the other kind.

The last three movies I have watched: Lynch's Inland Empire, Godard's 2 or 3 Things I Know About Her, and Mizoguchi's Ugetsu all dabbled in the spectre of hoing. Perhaps it's to offset either the weeping virgin glued to the tube in Empire or else the pristine, glamorous actress played by Laura Dern. One aspect of her persona is above such muck, yet another is down with the bleary-eyed, syphilitic Polish whores, grinding to "The Loco-Motion" and being real 'street' at the corner of Hollywood and Vine. Prostitution is then the ideal role when lolling in the gutters of reality, the few with eyes and legs spread, looking up at the stars?

Said act ballasts the countermelodic couple in Mizoguchi's film, yet one extreme on the wheel of fate. As husband Tobei ascends as a samurai, Ohama the wife is abandoned, left to be raped by roving soldiers and to earn her gold in that manner. Only when Tobei sheds his role in society does a sense of balance (no mo hoing) return. Godard of course opines that it might be the only poetic job within capitalism. Desire becomes dollars, flipping mattress-backs into sawbucks. It's as writer Nick Tosches once posited, if you're going to be a whore, at least be a high-priced one.

Juliette Janson, Godard's waterbearer for all things feminine in 2 ou 3 Choses Que Je Sais d'Elle, absorbs such extremes, playing two roles that are on the verge of appearing as separate entities. She is herself; she is Paris: "I was the world, the world was me." She is both mother and whore, but neither twain quite resolves within her.

Her son recites a dream early on:

I was walking all alone at the edge of a cliff. The path was only wide enough for one person. Suddenly I saw two twins walking toward me. I wondered how they would get past. Suddenly one of the twins went towards the other and they became one person. And then I realized that these two people were North and South Vietnam being united.

Not bad for a sleepy four-year-old in 1966, but maybe it's just easier for men to mash such disparities together? Mom counters with her own unredeemable dillemas: "In my dreams I used to feel that I was being sucked into a huge hole. Now I feel I'm beng scattered in a thousand pieces."

Of course, Godard assumes his role as auteur, a D.H. Lawrence sort of puppeteer, his characters just acting as vessels for any and all of his musings. And yet another aspect of Inland Empire ties back into Her, when the creepy neighbor of the former haltingly tells Laura Dern a parable. A Boy walks out into The World and casts a shadow: "Evil," her heavy accent slithers around that evocation.

Among the myriad whispers and interior monologues within Her, be it Godard's voice-over, of Janson's musings as she traverses through a Parisian landscape that's like a face, perhaps recognizable as her own (as much a mirror as it was for Emerson), lies another version of that old tale. She ponders silently aloud: "Thought meshes with reality or calls it into question." Elsewhere, before or after, I don't know which, from either the blackness in front of or behind the screen (or maybe before and behind my own eyes), the narrator rasps: "Our thoughts are not the substance of reality, but its shadow."
Posted by beta at 7:17 AM 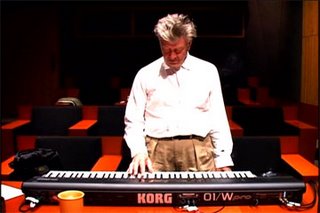 It's a style appropriated by everyone from Ghostface to Iñárritu: speak in non-sequiters until the devoted audience, caught up in self-mythology making, begins to believe that the shit makes sense. David Lynch has had such temples built, be they gates of hell in paper bags by a Denny's dumpster or geodesic hunting lodges, spots to get your Transcendental Meditation on, loci to just hummmmm and hmmmmmm yourself to...well, wherever it is you go where there's checkered tiles, Elvis, and blood-red plaits of curtains for eternity.

No doubt already aware that even the very act of watching celluloid flicker involves leaps of faith, wherein the mind must fill in the gaps so that the picture stabilizes, grasping at any and all images and sounds in an attempt to bundle it into coherence, Inland Empire, Lynch's 3-hour, "I bought my shit at Best Buy" DV movie simply laughs at our brains. Fat Buddha-like laughter, not exactly mocking, but it titters and clucks tongues in such a way that he seems to simply wish that his audience would simply be The Tibetan Book of the Dead: turn off the mind and just let the nonsense flow, unhindered by reason, logic, cause.

Shot in Lodz, Poland (in addition to the corner of Hollywood and Vine) with long strands of dialogue in Polish, in a way, Inland Empire is one giant Polack joke. Snatches of dialogue throughout seemingly diconnect from their scene and instead waft outwards to deal with the dunderheaded straw-grabbing taking place in the seats, commenting on the audience's jockeying for knowledge:

"You're lost in the marketplace, half-born..."

"Before, after...I don't know what happened first, a mind-fuck on me."

"I'm watching everything go around me like in a dark theatre before they bring the lights up."

The rabbitheaded sitcom that Lynch sprinkles throughout the proceedings (originally a short film on its own) begins to look more and more like the heads of jackasses, voicing such mental flailing as the search for "clues," referencing green jackets and clocks, as if these hero props might hold the key to "figuring it all out." And if Lynch could bring out a baseball bat into the audience at every screening (not an unlikelihood considering how few times this is showing before going to DVD), he would no doubt be screaming --between dinging taters out of our kneecaps-- "Pabst Blue Ribbon! Hot blondes! Titties'n'beer! Quit rubbing your fucking beard and thinking about this shit! One thing I can't fucking stand is warm beards! Makes me fucking puke!"

Barring said lumber, he instead brings me to my knees by using a fucking Beck song at the climax. "Okayokayokay, I'll stop wondering about the plight of women in this movie and how many personas Laura Dern has taken on. Bring back Trent Reznor and Marilyn Manson snuff films, anything, just pleasepleaseplease, turn off 'Black Tamborine'."

And much like any tough iconoclast (I'm thinking here of folk like Cecil Taylor, Deniro, Derek Bailey, Christopher Walken) or anyone whose spent his career bristling and being different, at a certain point, even that act becomes a tired riff. Just because you replace Roy Orbison with Little Eva, or insert Polacks to stand-in for scary midgets, Dennis Hopper, or laughing old people, it doesn't change the fact that Inland Empire is the least frightening, visually fuzzy and garish work. If anything, IE reminds me of something like Thomas Pynchon's V., taking on "the mystery of women" in the way that only a Polack can. Identities blur, places and times change, Dern is both alive and in death throes, women are weeping virgins and screwdriver-wielding whores, and it's not for us to wonder why.

The terror of the everyday, a theme Lynch revelled in for decades, be it on green lawns, in blue tomorrows, behind every restaurant dumpster, under every skirt, is replaced instead with the terror that arises only out of never knowing where you are. And if you don't know where you are, perhaps you don't know who you are either. It's something that Lynch sledgehammers home often through his characters. Sure, there are snatches of fine scenes and infinite theories at play, but with three incessant hours of hammering, how could you possibly miss the nailhead? And what's so frightening about blatant incomprehensibility?
Posted by beta at 6:44 AM